How is the skiing in the Lowther Hills?

From the Scottish Ski Club's 1965 classic booklet "Ski-ing in Scotland". The same skiing conditions can still be experienced on Lowther Hills half a century later! 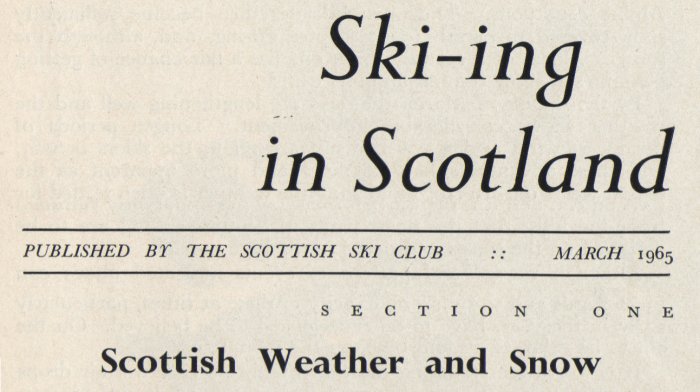 "Our Scottish climate is beset with confused and conflicting weather systems, Continental, Maritime, and Polar, all vying with one another, and with the Gulf Stream, to manufacture a Meteorologist's nightmare. It is seldom possible to make accurate forecasts in winter further ahead than a couple of days, and one can often be confounded as a weather prophet within a few hours."

"The prevailing wind is a south-west, bringing mild and rainy weather to the west coast. Fortunately it does not blow continuously and, as the centre of low pressure moves off, it is common for the wind to veer north-west, bringing colder, showery conditions. Frequently this weather freshens before the wind backs south-west again, and in these periods snow gets plastered into the gullies and collects deeply on all lee slopes. The cycle is repeated with milder air from the south-west when drifts, at least on the lower hills, are washed down and compacted and made ready to be frozen and rebuilt as soon as the wind veers again. This is the ideal cycle for building up lasting snow on our mountains."


"It is usual at some time in the early spring to have a settled anti-cyclone over the Continent, bringing cold east winds to Scotland. When this occurs (most commonly between early February and mid March) our hills give their nearest approach to Alpine conditions. The open hillsides then become sufficiently snow-covered to permit uninterrupted ski-ing, and, although the snow is seldom continuously good, one has a fair chance of getting genuine soft-snow running in gully drifts."


"Although the general patterns of events indicated above can be relied upon, there are tremendous variations within the cycle. At any time in the winter and spring the hills can be engulfed in blizzards and storm. The ferocity of these at times, particularly early in the year, have to be experienced to be believed."

"This has a considerable bearing on comfort, as well as on the more important aspect of producing snow, for it is preferable to ski in falling snow than in falling rain -provided there is relatively little wind. Of all the single factors which can make ski-ing impossible, wind is undoubtedly the winner. Unfortunately, Scotland is open to all the winds that blow."

"The western, central and eastern mountain areas may have quite different conditions prevailing at the same time. Generally speaking, the west has the greatest snowfall, but suffers worst from the mild southwest wind. Tremendous thaws can strip feet of new snow in a day."


"Unlike the Alps, snow in Scotland never falls in great quantities at one time, and seldom vertically. On the open hillside it is usual to find some slight snow cover mostly windblown into drifts to the lee of tufts of grass, undulations and the like. As soon as the thaw comes these conditions alter rapidly. The open hillside loses the little snow it had, and the deep drift in the gully becomes a heavy duff, like unleavened bread." 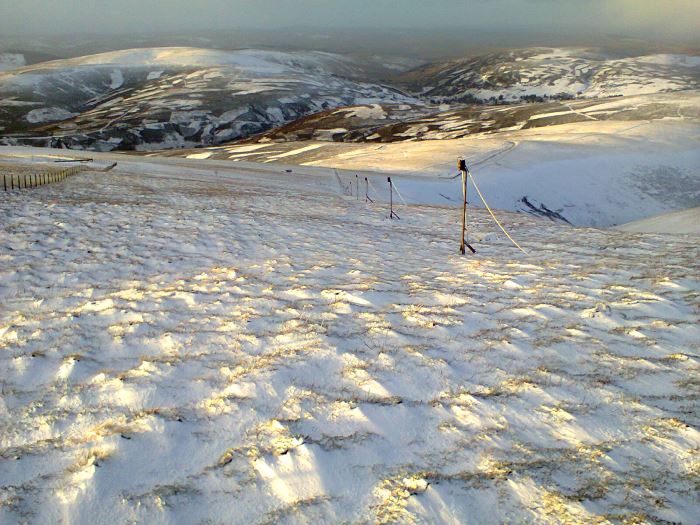 "In an average season one may expect some good ski-ing days before the end of January, and a lot more during February. The early part of the season is prone to stormy weather and blizzards, sometimes of great ferocity."

"But precisely and exactly WHEN cannot be guaranteed in this booklet,or any other. For that you should rely on local knowledge as near as possible to the time you want to ski."