The Cradle of Scottish Snowsports

The Lowther Hills - Cradle of Snowsports in Scotland. A Historical Background; from Scotland's first Curling societies in the 1700s to the early plans to create Scotland's first commercial ski centre in the 1950s. 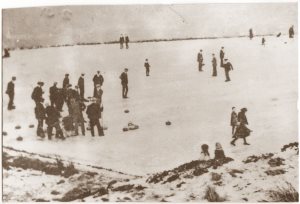 1700s - "Better curlers than those of Wanlockhead can nowhere be found". Curling was the most popular sport amongst Leadhills and Wanlockhead miners well before 1777, the date when the Wanlockhead Curling Society -one of Scotland's very first Curling societies- was established.

1900s - The idea of developing the Lowther Hills as a tourist destination can be traced back to the early 1900s, when the Hopetoun Arms Hotel promoted Leadhills as a place to visit for its fresh mountain air, in the fashion of the early Swiss and Austrian alpine resorts. A railway line to Leadhills and Wanlockhead was built "also owing to the growing popularity of the Leadhills district as a summer resort". 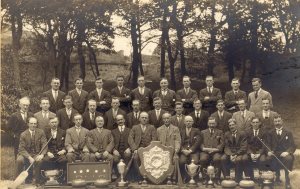 1912 - The Curlers from Wanlockhead sweep the board by winning all the major trophies including the Carsebreck Cup, Scotland's National Trophy.

1930s - Wanlockhead and Leadhills' Curling tradition starts dying out as the lead mines close and many families move out of the area. By that time there were 9 Curling ponds built in the two villages.

1932 - Professor Burnett of Dumfries reported to have skied for 16 weekends in the Lowthers. In Wanlockhead, he showed local children how to make skis with barrel staves and leather strap bindings. His pupils vanished, however, with the closing of the mines in 1934.

1941 - "The slopes were admirable for skiing", reports Dr T.R Burnett, as a Lake District Ski Club member, after a visit to the Lowthers.

Late 1940s - The end of World War II signals the beginning of a new era of leisure for Scots. The Lowther Hill Radar road is built in 1947, allowing easy access to the ski slopes. 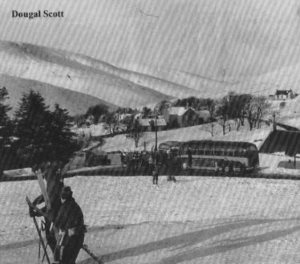 1952 - "Would Wanlockhead provide?" - Wanlockhead is considered as a potential location for Scotland's first ski centre, as skiing pioneer Major Philip Rankin calls to action in the Scottish Ski Club's journal. The area is also featured in BBC's "Country Magazine" programme with Alistair Borthwick.

1953 - The South of Scotland Ski Club is created to exploit to better purpose the excellent opportunities which often occurs on the Lowther Hills. The Hopetoun Arms Hotel in Leadhills is chosen as the club's headquarters and its manager John Wilson becomes instrumental in the early years of the ski club.

1956 - First skilift on Lowther Hill: The South of Scotland Ski Club sits on Throw Rig an International BTD Crawler previously used in Aviemore (pictures of the remains of the tractor here and here).

Late 1950s and early 1960s - With a bus to the top of the run, Lowther Hill became popular, particularly with US airmen stationed at Prestwick. Local farmer Charles Telfer carried skiers up the hill aboard a tractor-pulled charabanc. Other tow operators on the hills during the 1960s and 1970s included Wanlockhead's Alec Paul and South of Scotland Ski Club's Dougie Scott, who also provided equipment hire and tuition. Après-ski was centred on Wanlockhead Youth Hostel, one of the first in Scotland.

1963 - The guide book Ski-ing in Britain highlights the popularity of "the Leadhills, near Wanlockhead" for people living in the south-west of Scotland.

1964 - The Scottish Tourist Board echoes the increasing popularity of the area as an alternative to skiing in the Highlands in their marketing brochure "Winter Sports in Scotland".

1965 - "Winter sports resort crying out for development" - The Dumfries News publishes a double page spread about "the tremendous potential as a ski centre" of the Lowther Hills. 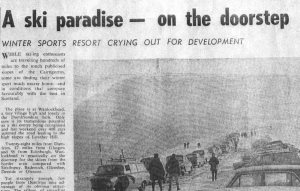 Late 1960s - "Plans were drawn to put in proper ski tows and build chalets on the disused railway line and even the Duke of Buccleuch threw his weight beding the venture", reads Paul Lamarra's account of skiing on the Lowther Hills.

Mid 1970s - After a decade of service, Lowther Hill's permanent ski tow, the International BTD Crawler put on Throw Rig in the early 1960's by the South of Scotland Ski Club, ceases operation and is abandoned on the hill.

1978 - Proof of popularity: The Reader Digest AA New Book of the Road shows the Lowther Hills as one of Scotland's 4 ski centres, together with Aviemore, Glenshee and Glencoe.

1980 - The Scottish Tourism Board mentions the potential for the development of Winter sports in the Lowther Hills in their internal report "Winter Sports Development Study". 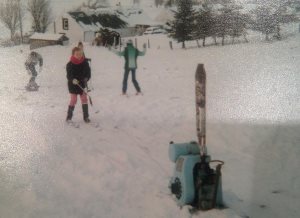 1983-1986 - A Land Rover provides uplift for skiers on the Radar road from Wanlockhead.

1986 - The Leadhills Ski Club is created with the aim to "Promote ski-ing on the Lowther Hills in the area of Leadhills and Wanlockhead". See the club's constitution and first minutes here. A rope tow for local families is operated in Leadhills.

In the following two decades the former mining villages suffered of economic stagnation and many families moved out of the village. 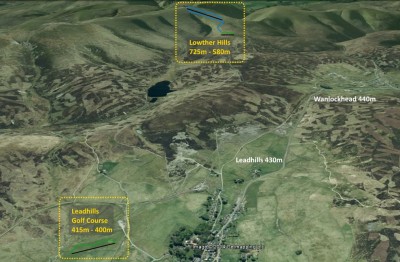 2016/17 - Erection of the first phase of post and rail snowfencing, further improvements on the webcams, Lowther Hill slope, ski tow wheels, and engine hut. 45% funding of clubhouse and groomer raised.

2017/18 - Erection of the second phase of post and rail snowfencing, 100% funding of clubhouse confirmed.