South of Scotland's only snowgroomer: Thank you for your donations 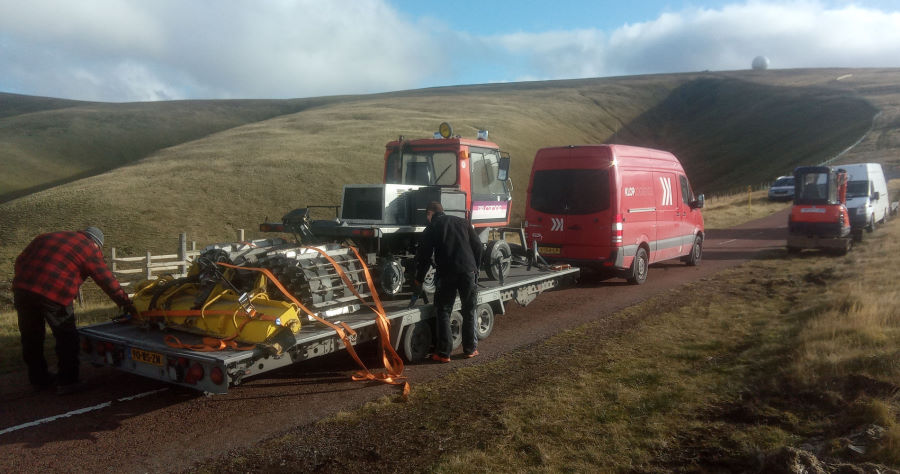 Thank you very much everybody. We have successfully crowdfunded a snow groomer for the Ski Club's facilities on Lowther Hill.

Back in 2015 we asked your support to acquire a piste basher. A snow groomer would help us to compact and move drifts of snow around at Lowther Hill. Groomed snow creates a longer lasting and much better surface for skiing and snowboarding. A well pisted snow surface is of particular help to beginners and children, helping them to enjoy snowsports and progress their skills.

While we had to pause the crowdfunder for a couple of years due to the lack of progress obtaining a lease on the hill, we promised you we would get a groomer - and we like to keep our promises:

Ladies and gentlemen, we introduce you to the only snowgroomer in operation in the South of Scotland. This was Lowther Hill on Wednesday 30th October 2019 as our mighty Kässbohrer PB070 arrived in Scotland's Highest Villages from the southern French Alps.

And this was two days later, having a first stroll around its new home as the groomer's tracks were fitted back on and the initial mechanical checks had been completed.

The groomer is now having a rest and will continue undergoing tests and a comprehensive service over the next month. In the meantime:

Also, thank you so much to all those who contributed towards the groomer with their voluntary work, favours, donations of equipment, and all kinds support. You know who you are. Thank you very much for making this possible.